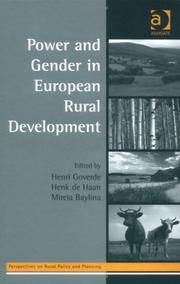 Gender and Power in Rural Greece Edited by Jill Dubisch; Collections: Introduced by Jill Dubisch, the book contains eight original essays and a republication of the Friedl article. Among other topics, the essays examine changes now occurring in Greek gender roles, the ways women deal with oppression and act as mediators between the domestic. Gender shapes power, from the ‘private’ relationships of the household to the highest levels of political decision-making. However, as readers of Duncan Green’s blog have pointed out, calls for development practitioners to place power at the centre of their efforts and to 'think and work politically' (TWP) usually forget about gender. "This book is a must-read for scholars interested in the gendered process of global restructuring. Elisabeth Prügl succeeds superbly in teasing out the power politics involved in European agricultural policy. Through the lens of a feminist-constructivist approach, she makes visible the multiple mechanisms of gendered power within the state.   Other subject matters covered by the book include social marginality, land use conflict, gender, cooperatives, animal health, rural marketing, information and communication technology, micro-business, and rural economic crisis. The book is thus an invaluable source of useful information on contemporary issues in rural development for.